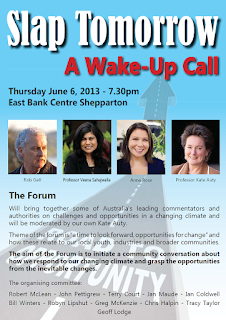 BEAM life member Lesley Dalziel was part local contingent gathered in Shepparton on the 6th of June for a forum titled Slap Tommorrow.

The event was organised by a group from Shepparton, Tatura and the surrounding area called Beneath the Wisteria to consider the public and individual response to climate change. The group is concerned about community health and how people at the extremes of age cope with increased temperatures. Lesley gives her thoughts on the event…

There was a good mix of ages in the huge audience with some school students, and a lot of the old faithful. Speakers were Anna Rose who some will remember from the ABC program about her efforts to work through climate change denial on the somewhat unsuccessful trip with Liberal Nick Minchin, to try to change his mind on climate change.  In fact he did shift his position slightly towards the end, which is perhaps the best we can hope for, one small step at a time. Anna’s advice was to talk to people from a common base when seeking to change denial attitudes, ie if you’re talking to a farmer talk about things he/she is interested in, and they might be affected already and in the future.  Anna is a very impressive and inspiring young woman who has not given up on her hopes to save her world.

The next speaker was Professor Veena Sahajwallah who we remember from The New Inventors on the ABC.  She is an engineer and is making a huge impact working with industry to use waste materials.  In addition to Reduce Re-use Recycle she adds another R, Re-form.  She said waste is in fact a resource.  She gave several examples but the one that I was most impressed with is the use of tyres in steel manufacture. OneSteel has used over 1.5 million tyres in its steel works in Newcastle and Laverton. The tyres are not burned just as a fuel but when fed into a furnace at 1500 degrees centigrade, they go directly to their basic particles like hydrogen gas and iron.  Amazing really.  There are a lot of mistruths out there as we know. But one true fact is that recycling Aluminium uses only 5% of the energy that making it from scratch does. Another is that you can’t use, re-use or recycle plastic as plastic indefinitely but it can be re- used as the old tyres (above). Macadamia nut shells are 70% of the weight of the Macadamia, and can be reformed into building material. Her take home message was that without innovation and change our industrial base is unsustainable.  But the good news is that all this waste is a huge resource waiting for us to use it.
Go to SMaRt@UNSW for her biography.

The final speaker was that old war horse Rob Jell, who far from being just a pretty face is a seasoned campaigner, and scientist.  He was very passionate and as one of the audience said, “Cranky”.  Cranky that things have not progressed as much as need be. He showed a lot of graphs and things and said the science was incontrovertible.  He thought if you could show people the evidence they would get it, something from experience we all know is not going to happen.  I think Anna’s approach was much better.  But of course we do not have the time for long delays.  Still Europe especially Germany and China are making huge strides though Australia is lagging behind.  I think it was Rob who told the tale of a visiting German scientist, an expert in all things solar who visited a lot of places in Australia and thought the South West of Tasmania was the worst place he saw on the whole trip for solar energy capability, but he said, it is still way better than Germany, which made everyone laugh. Germany of course uses a lot of renewable energy, and is phasing out nuclear.

To find out more you can go to the Beneath the Wisteria blog. This is a wonderful initiative in Shepparton, they meet the last Saturday of the month at 11.30AM under the Wisteria in the Maude Street Mall and the topic is climate change.

I thought to myself, we can do that.

Sincere thanks to Judy Clarke for her excellent drive up, the car was full. But of course we are looking at a future where these excursions will be seen as self indulgent, unless we actually learn something and do something as a result. And if you wondering if SLAP is acronym, the answer is……No.  It is just what it says, a slap or a wakeup call for the future.

Click here to read the latest newsletters and updates